A high-voltage shock combined with a physical barrier will deter anyone from attempting to penetrate the perimeter fence. The detecting ability of a Nemtek electric fence energizer will sound an alarm when the perimeter of the property being protected has been infiltrated or tampered with. By keeping the perimeter protected using an electric fence, the attempted break in of the protected area is delayed, giving additional time for a reaction team to respond.

The history of security has always been based on the detection of an intrusion and most countries make use of the detection factor. Due to an increasing crime situation worldwide however, the importance of deterring intruders as well as maintaining high levels of detection, has increased tremendously. Electric Fencing offers us this possibility of deterring intruders as well as detecting and alarming. 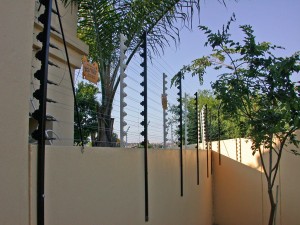 An electric fence acts as a 24-hour patrolman, patrolling the entire area every second. The activities of an electrified fence also do not rely on the human elements as opposed to conventional security systems, which have to be activated and de- activated accordingly.

As crime develops into a more violent threat, homeowners are forced to take more drastic measures in order to protect themselves and their properties. An electric fence, being a barrier on the perimeter of what you are protecting, offers extended reaction time as opposed to conventional security systems only alarming once the intruder enters or attempts to enter your home.

Conventional fences are not always impenetrable but with the help of electric fencing, the ultimate purpose of a fence can be reached. Electric fencing can serve several purposes, including animal control or security. In agricultural / game fencing, it is the shock that deters the animal from putting further pressure on the fence line. The pressure from the shock received is short lived and does not physically damage / harm the animal, unlike barbed wire, which can cause severe cuts and permanent damage. In cases where livestock are forced through an electric fence due to veld fires or wild animals, the risk of injury is much lower than in the case of barbed wire fences.